Life In and Out of Lockdown

As several states around the country move in and out of lockdown, it is worthwhile to once again urge people to record their memories of the pandemic.  Around the country, many archives and libraries are recording for future generations people's experiences of the crisis.  As family historians, we need to do the same thing and record our own experiences of this time.

The Covid19 pandemic has been (and still is) a major historical event.  For all of us who have lived through it, there will be memories of Covid, both positive and negative, that stand out.  There are new routines, changes in how we live, work, communicate, shop, relax, learn, and more.  We all have seen stark images of police blockading state borders, empty streets at midday in our cities, supermarkets during panic buying or opening with stripped shelves.  Then there are the more personal experiences - business closures and work stand downs, learning to work from home or change our daily routines.
Then there are the positive experiences.  Teddy bears and rainbows in windows, people standing at the end of their driveways on ANZAC Day, clap for carers, support we have received from friends colleagues and neighbors, the joy of getting out and about after lockdowns ease.  For many of us the simple pleasures in life have taken on new significance as we rediscover them after the trial of lockdowns.

Here are a few questions you might consider when recording your personal experiences of Covid-19.

Posted by Campaspe Library at 10:25 AM No comments:

That being the case, the usual popularity lists found on the internet – those that record the top 10, 20, 50 names – are unhelpful unless they provide frequency statistics.

There were also the commonly used spelling variations, abbreviations and diminutives.  For example, if you don’t know that Polly was a diminutive of Mary or that Nellie was a diminutive of Ellen and Eleanor and Helen, you may struggle to find your ancestors’ entries.  Harry for Henry, Bill for William, Fred or Alf for Alfred, Dick for Richard, Charlie or Lottie for Charlotte, Maggie, Meg or Maisie for Margaret.  Elizabeth was another extremely common name with multiple diminutives - Eliza, Liz, Lizzie, Betty, Betsy, Beth, Bessie, Lisbeth, Liza - the list goes on.

In the 1700s the top five names for each gender were :
Boys - John, William, Thomas, Richard and James
Girls - Mary, Elizabeth, Ann, Sarah and Jane

In the 1800s the top five names for each gender were :
Boys - John, William, James, George and Charles
Girls - Mary, Anna, Emma, Elizabeth and Margaret

There were, of course, always fads among names - copying that of the current Monarch and their family, for example, or using a traditional name common in your family.

Naming patterns were also common in many families, although they are by no means a reliable way of predicting the names of children.  Traditionally, the first son would be named for the paternal grandfather, the second son for the maternal grandfather and the third son for the father.  For females, the first daughter would be named for the maternal grandmother, the second daughter for the paternal grandmother and the third daughter for the mother.  Providing, of course, these names were not the same.

Then, there are the families that seemed to delight in using unusual names for their children, and those who followed popular fads.  Horatio, for example, made a brief surge in popularity after Nelson's victory at Trafalgar.  Similarly, Adolf disappeared from German communities after World War 2.

Posted by Campaspe Library at 9:47 AM No comments:

On the 9th of August the Public Records Office of Victoria will launch their new search and online ordering system which we are told will make ordering and managing your record and copy requests a whole lot easier. This system will replace their current catalogue 'Access the Collection'.

According to a statement made by the PROV, the upgrade will allow you to:

Your last two years of history will be maintained so that once the upgrade launches, you’ll be able to login as normal with your email address.

The statement also adds the following :

Researchers please note some changes to our services in the lead up to launch:

We appreciate your patience as we bring you our brand new system!

Other benefits of the new system

Note: The catalogue terminology "unit" has changed to "box" and "consignment" to "record groupings" to make the collection more accessible to new researchers.

I have always found the PROV website easy to search and use, but most of my access is done remotely as I live some distance away and rarely have the time to visit one of their reading rooms.  As a result, I am really looking forward to exploring the changes they are making and look forward to the launch.

Posted by Campaspe Library at 9:01 AM No comments:

Find A Grave - the Good and the Bad

Find-A-Grave has been active for more than 20 years, first appearing online way back in 1995. Originally it consisted of records of celebrities and their burial sites and was created by Jim Tipton, an American with a passion for visiting the graves of the rich and famous.

As the site grew it expanded to include the graves of non-celebrities and moved from the United States to the rest of the world.

As the popularity of the site took off Tipton sold the Find A Grave to Ancestry. The site now contains more than 75 million photos and over 170 million burial records.

The vast majority of contributors on Find A Grave have the best of intentions — to help others. At its best, the site can be a boon for Family History researchers.  Being able to view the grave/headstone of a relative buried overseas or in a place we cannot easily access ourselves is a huge treat.  That this website is completely free makes it even better.  Several times I have been delighted to find a relative has a memorial on Find-A-Grave, complete with dates and details.  Always I am amazed at the generosity of people out there, giving their time to help make researching easier for others.

Within the Find-A-Grave community, however, there has emerged a small group of users who seem more motivated by competition. The top contributors have added over 200,000 memorials each, and there are some who have over a million each.

Issues have arisen with the webpage of users - all volunteers - who in their haste to add to their count of memorials, have forgotten that not everyone wants their recently deceased loved ones to have an online memorial, especially one added and controlled by a complete stranger.  In the worst cases, a Find-A-Grave obituary has been posted online before all the individual's family members have even been notified.  Then there are issues of accuracy - and how to get inaccurate information corrected of removed.

Several suggestions have been made to create a moratorium on non-family-members posting memorials for the recently-deceased on Find A Grave for at least some time to give the families of those involved a chance to deal with a loved one’s death.  To date no steps seem to have been made in this direction.

Posted by Campaspe Library at 4:02 PM No comments:

Who Do You Think You Are Magazine

The latest issue of Who Do You Think You Are magazine is now available free online for Campaspe Library members via our subscription to Libby eMagazines. 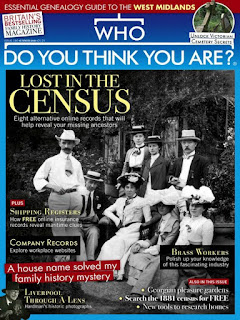 Posted by Campaspe Library at 9:30 AM No comments:

The latest issue of the free quarterly online Irish Family History magazine 'Irish Lives Remembered' is out now.   The magazine can be downloaded and read on your computer or tablet. 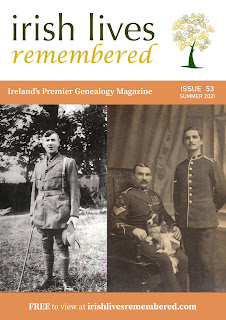 Posted by Campaspe Library at 3:41 PM No comments:

It has been announced that home access to Ancestry Library Edition will continue until 31 December 2021.  Ancestry made the decision back in April 2020 to allow this database, normally only accessed in the library buildings using our public PCs or wi-fi, to be accessed from home while the CoronaVirus pandemic impacted library access for many.  So Campaspe Library members can continue to access this fantastic genealogical resource from home.

To access Ancestry Library Edition, you need to go to the Campaspe Regional Library web page at https://www.campaspe.vic.gov.au/library  On the left hand column, click on 'Genealogy' and then on 'Databases'.  The link for Ancestry Library Edition from home is at the top right.  You will be prompted to log in using your library card number and PIN, then follow the prompts to Ancestry's page and continue researching your family history from the comfort of home.
For many genealogists who have been restricted close to home during the pandemic, this free access to the Ancestry database through their local library membership has been a fantastic opportunity to keep researching from home.  A huge thank you to Ancestry for making their database available to so many.
Posted by Campaspe Library at 12:58 PM No comments: