Did your Ancestor fight at Waterloo?

Newly added to the records available from Ancestry.com are those of the British troops who fought in the Napoleonic Wars and Anglo-American War, including the historic Battle of Waterloo.  Digitized from documents held by the National Archives in series WO 12, the collection comprises some 460,000 pay and enlistment records, known as Muster Rolls.
According to the Ancestry website, "this series comprises selected muster books and pay lists of the Cavalry, Foot Guards and regular infantry regiments of the line. Also included are special regiments or corps, colonial troops, various foreign legions and troops, garrison battalions, veteran battalions and depots. The majority of muster books and pay lists cover the period from 1812 to 1817, during the Napoleonic Wars and the Anglo-American War, though some rolls go back as far as 1779 and also up to 1821. Several regiments that participated in the Battle of Waterloo in June 1815 are included in this collection."
Muster rolls and pay lists were troop lists taken on a monthly or quarterly basis for pay and accounting purposes and may provide enlistment dates, movements, and discharge dates of soldiers. For most regiments or units in this collection, records have been indexed from one muster roll per year. Rolls and lists not indexed may be browsed by category and piece description.
Records vary but may include the following details:
So have a look and see of any of your ancestors fought during these wars, and the collection could help you fill in the details of their service, the battles the fought in, how much they were paid and if they were ever held as prisoners of war.  Remember access to Ancestry is free in all our library branches.

Posted by Campaspe Library at 10:55 AM No comments:

The records of more than 840,000 patients committed to British mental institutions during the 19th and early 20th century have been collected by Ancestry.com.  The Lunacy Registers and Warrants 1820 - 1912 were digitised from records held at the National Archives in Kew, West London.  Each record contains the patient's name, institution name, admission date, death/discharge date and - in many cases - the reason for being transferred to the institution and past crimes committed.

The admission records and warrant books were compiled by the Lunacy Commission, which was set up in 1845 to oversee the country's growing network of asylums.  They detail people who were either transferred from prisons on grounds of insanity or found not guilty and sent to asylums instead.  By the end of the nineteenth century there were over 300 mental institutions in the UK, some of which are still in operation today.  These include Bethlem Royal Hospital, where the word 'bedlam' originated and Hanwell Asylum, which is best known for its revolutionary and humane approach to the treatment and rehabilitation of those affected by mental disorders.

Within the collection are some of Victorian Britain's most notorious violent criminals who were judged not guilty of their crimes by virtue of their insanity.  They include Aaron Kosminski who has recently had been considered, though discounted, as being Jack the Ripper.  The Polish Jew emigrated to the UK in 1881 and worked as a barber in London's East End before being committed to Colney Hatch Lunatic Asylum in 1891 for lewd behaviour.

As well as more serious crimes, many of the people committed to these institutions were housed there for long spells after being found guilty of relatively minor offences.  This includes women like Elizabeth James who was sent to an asylum simply for 'being disorderly' and Jane Smith who found herself committed in 1821 for stealing two blankets.  The records also reveals how many patients tragically died in institutions after spending most of their lives locked up.  One patient, Elias Rosenthal, lived at Rubery Asylum in Birmingham for a total of 59 years until her death.
Posted by Campaspe Library at 2:35 PM No comments:

Are you researching family in the United States?  Then you may be interested in a series of free webinars to be offered by the people at FamilySearch this October.  While the actual sessions for this series of classes are full, 15 will be offered as online webinars for anyone who is interested to attend. Click here to look at the program of topics offered.

"The Family History Library and the Research Specialists of the United States and Canada Reference team invite you to a free, never before offered, week-long seminar. The focus will be exclusively U.S. research. The seminar is perfect for beginning and intermediate genealogists interested in learning about U.S. records, FamilySearch resources, and Family History Library collections.

Come and spend a week learning from our expert staff of genealogists on how to effectively use the FamilySearch Catalog, Historical Records, and Research Wiki. Explore such topics as cemetery, census, church, immigration, land, military, naturalization, newspaper, probate, and vital records. Learn more about African-American and American Indian research. And discover new techniques, strategies, and methodology to apply to your genealogical research problems."

So check out the range of topics and see if there are any that interest you, and mark them in your diary for October.
Posted by Campaspe Library at 2:13 PM No comments:

While Twile has been around since 2013, I have only recently heard about it and gone to have a look.  While I do sometimes sigh and wonder if I want ANOTHER online tree that I have to keep updating, this presents data in a somewhat different way and is well worth a look.  The more basic version is free, your data and photos are only available to the people you choose, so have a try and tell me what you think.
The following announcement comes from the Twile website:
"Twile allows family historians to create rich, visual timelines of their family history, made up of milestones and photos from their ancestors’ lives. Genealogy services, like MyHeritage and Ancestry, focus primarily on providing access to historical records. Twile, on the other hand, helps users get a visualization of the information and easily share it with their family.
The website is completely free to use, allowing users to build or import their family tree and create a timeline by uploading photos or adding milestones – such as birth, marriage and death – for anyone on the tree. Twile Plus is a premium subscription service and is available for £19.99 per year, giving access to a wider library of milestone types." 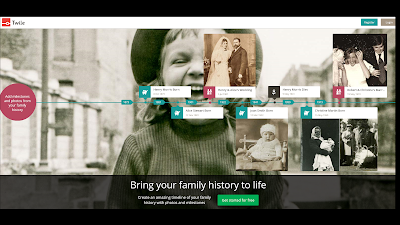 Posted by Campaspe Library at 9:57 AM 2 comments:

The centennary of World War 1 has created enormous interest in many people for information about their military ancestors.  In order to help interpret digital images of A.I.F. personnel and provide more detail of military life the following breakdown of Australian Anzac ‘Kit’ has been prepared.

The individual AIF infantryman was issued with a universal kit or duffle bag into which he packed the following: Other pieces of kit included insignia and rank badges, and training garments including white canvas plimsolls and hat. He was assigned three brushes: hair, shaving and tooth. A comb, razor in a case and soap were his allotted toiletries. Underclothes were essential and each man was given two pairs of cotton drawers (underwear), 2 singlets, 2 flannel shirts and 3 pairs of socks. To keep out the chill he was allotted a jersey and khaki cap comforter. Essentially a woolen hat, this was often worn under helmets or during trench raids. All of the essential smaller items were contained in a ‘holdall’ and supplemented by a ‘housewife’, The Housewife was a holdall/pouch containing a thimble, two balls of grey darning wool (for socks), 50 yards of linen thread wound around card, needles, brass dish buttons and plastic buttons for shirts. The personal kit it would be finished off with the essentials of a knife, fork and spoon, that could be used with the D-shaped mess tin. Additionally a service knife was issued, which contained a marline splicing spike, a tin opener and lanyard.

Soldiers wore a British Pattern 1908 webbing arrangement in leather and/or heavy canvas.  Developed for the British Army, this pattern was the most advanced arrangement at the outbreak of the war and utilized by most Commonwealth armies, having the one main advantage that it could be taken off and on in one piece without the probability of losing any pieces. The basic arrangement consisted of the following components:
As the Australian infantryman evolved as a fighting entity, especially into the main Western Front European theatre, the essential kit also contained a gas mask, personalized cold weather accessories and preferred trench fighting weaponry, such as knuckle-dusters, clubs and pistols. Officers might privately purchase trench periscopes, binoculars and personal accessories that could more readily be stored in dug-outs.

The Australian Infantryman was also assigned ‘emergency rations’, only to be used as a last resort and consisted of corned or ‘bully’ beef, hard tack biscuits, tea, salt and matches. In situations like that of the Gallipoli campaign, such rations were regularly called upon. Official kit was supplemented by personally acquired ‘unofficial’ kit, which, if withdrawn during official inspections, was tolerated. Souvenirs, collected from the battlefield or bought from local merchants, regularly found their way into a soldiers pack.
Posted by Campaspe Library at 10:21 AM No comments:

Ancestry has updated the London Workhouse Admission and Discharge Records, 1659-1930. They have added 303,179 new images and 3,771,083  new records, bringing the collection total to 542,642 images and 7,035,609 records. Newly added are the workhouse admission and discharge records for poor law unions in the South of London as well as additional records from Central and West. Future updates are planned to include indexed records from the North and East areas of London.
Boroughs Added or Updated:
This collection includes selected admission and discharge records for workhouses created and administered under the Poor Law Acts. The exact information you can find about your ancestors varies according to the record.
Remember that while Ancestry is a subscription database, you can search their records free at all branches of Campaspe Library - and at many other public libraries.
Posted by Campaspe Library at 9:46 AM No comments:

Firstly, FamilySearch.org has started a new browsable image collection of the 1828 census from New South Wales. So far, 2,500 images are in the collection. The 1828 census lists the name of the family member (including servants), age, class (free or bonded), ship name and year of arrival, sentence (if applicable), employment, residence and religion. If the resident was a farmer, additional information was also collected such as the number of acres and livestock totals. Currently the images in the FamilySearch collection can only be searched by place, but eventually they will be indexed by name as well.

The second collection is a browsable image collection of Tasmanian civil registrations of births. The collection consists of some 12,700 images and spans the years from 1899 to 1912. A typical record gives the name of the child, date of birth and sex. For the father it lists the name, age and birthplace. For the mother it lists the name, maiden name, age, when/where married, place of birth and other children. The images in this collection are organized by place and then by year. Note that for this collection there is often a long lead time between when the child was born and when it was registered, and it is possible that children who died soon after birth were not put in the register in Tasmania during this time period.
Posted by Campaspe Library at 9:20 AM No comments: