Well, its done.  I have sold the old family home and moved to my new house.  There are boxes everywhere and I feel like it will take me MONTHS to unpack and settle in, but I haved moved house.  Closing the door on the old family home for the last time was quite an emotional experience - I was only 2.5 years old when my family moved in, and after several years away I moved back to care for my parents in their last years, so there are a lot of memories in that house.
I've posted a few times about finding treasures in the cleanout, many hidden amongst piles of rubbish and the final packup was no different.  It was amazing finding things that had fallen behind wardrobes and bookcases years ago or were stashed in the back of a drawer or under a bed and never recovered.  Given that I have been researching the family history since I was 16 years old, and have always been interested in my parents stories of their childhood, how some of these things were never mentioned, much less produced, escapes me.  I think my parents had forgotten about many of these treasures themselves.

A couple of examples.  The first was found in a pile of other papers - many equally fascinating and unseen before by me  - hidden in the linen cupboard behind some old sheets. Apparently my dad did some running while he was a lad at school - this certificate below dates from 1935, and dad would have been 9 years old at the time. 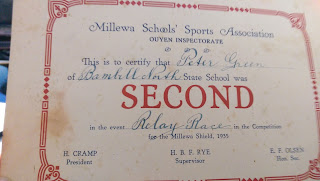 The second was an even more unlikely find.  It was only discovered when the removalists were loading up my furniture to take it to the new house.  This colored print of my father was taken from a photograph from when he enlisted in the Air Force, during World War 2.  It is hand colored on cardboard - and has spent who-knows-how-long lying behind a wardrobe in my parents bedroom.  Neither my sister or I can recall ever seeing it, although we are both familiar with the photo from which it is taken, and how or when it was created I have no idea. 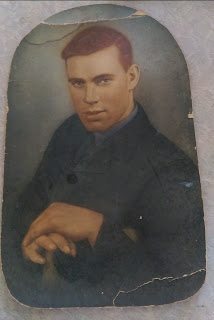 While I am grateful I have these treasures now, I would have loved to have seen them when my parents were alive.  There are so many questions I have - and obviously stories I missed out on.
Posted by Campaspe Library at 11:26 AM