Four volumes of historic Irish police records have been made available online for the first time. Digitised by University College Dublin, the Dublin Metropolitan Police Prisoners Books provide the names of people in the city who found themselves on the wrong side of the law between 1905-08 and 1911-18. The browsable records list the names, ages, addresses and occupations of those who were arrested, plus details of their alleged offence. In most cases, the handwritten entries also provide information about the outcome of the subsequent trial and punishment.

According to the University website, the Dublin Metropolitan Police (DMP) Prisoners Books for 1905-1908 and 1911-1918 are amongst the most valuable new documents to come to light on the revolutionary decade. They include important information on social and political life in the capital during the last years of the Union, from the period of widespread anticipation of Home Rule, to the advent of the 1913 Lockout, the outbreak of the First World War, the Easter Rising and its aftermath, including the conscription crisis of 1918. 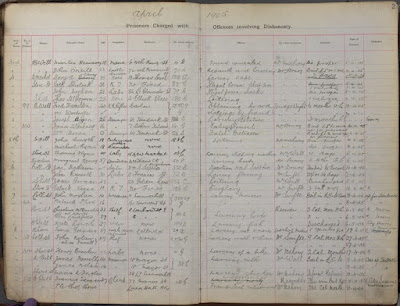 Posted by Campaspe Library at 11:58 AM